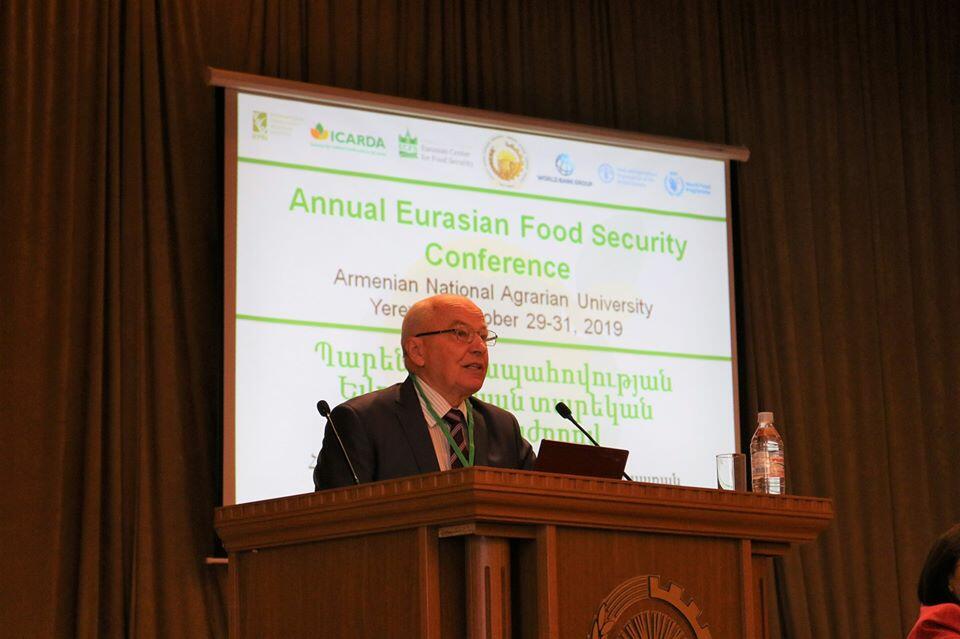 Opening the conference, ECFS director, Dean of the Faculty of Soil Science of Lomonosov Moscow State University Sergey Shoba noted the relevance of cooperation in the field of food security (FS) in a changing world and spoke about the results of joint work in the region to ensure sustainable agricultural production and food security.

Already in her first plenary presentation, Beverly Postma, lead consultant for the GreenOcean Group (Singapore), noted that 2020 is the Big Year for Nutrition, as it is halfway through the UN Decade of Nutrition Action from 2016 to 2025.

In global scale hunger has again escalated in recent years: about 820 million people on Earth experience hunger (which is almost every 11th inhabitant of the planet), 22% of children under 5 years old are stunted and 7% from malnutrition, and every 3rd woman of reproductive age suffers from anemia.

The Republic of Armenia actively contributes to the improvement of the state of FS in their own country. According to Artak Kamalyan, the government of Armenia pays special attention to increasing food self-sufficiency and reducing dependence on imports, increasing the production of quality food, expanding and diversifying sales markets, as well as the development of advisory services and education in the field of agriculture.

Deputy director of the ECFS Roman Romashkin, touched upon the issues of agricultural integration of countries within the framework of the Eurasian Economic Union (EAEU). According to the expert for the balanced development of the common agricultural market it is possible to introduce production quotas, as well as monitor foreign and mutual trade. Stimulating domestic demand could be a powerful driver for food systems development. Head of the Center for Agro-Food Policy of the RANEPA Natalya Shagayda in her speech examined the role of agricultural holdings in ensuring food security. Currently, large agricultural holdings (with an income of over 2 billion rubles) account for 37% of agricultural products. The speaker shared that in conditions of high concentration of production, there is an increase in environmental and veterinary risks.

Deputy Head of the Department for Strategic Analysis and Forecasting in Agriculture and Food Production of the Ministry of Agriculture of the Republic of Uzbekistan Marsurjon Rasulev presented in his report the Uzbekistan Agriculture Development Strategy for 2020-2030. The goals of the reforms are to create a new, competitive, export-oriented agri-food sector.

An up-to-date report was presented by an employee of the ECFS Maria Konyushkova referred to agricultural informatization. Precision farming technologies are becoming more widespread in the world, since they can significantly increase the fertility of the land. An example of such technologies is remote and contact sensing, digital mapping, crop forecasting, differentiated fertilizer application, the use of Big Data, etc. In this regard, in 2019, an electronic database that allows standardizing and exchanging soil information was patented by ECFS staff

ECFS expert Anastasia Fabrichnova noted in her report that thanks to the improvement of the general economic situation, as well as the directed efforts of international organizations such as WFP and FAO, the countries of Central Asia and the Caucasus have achieved significant success in the fight against malnutrition and other forms of malnutrition in recent years. In Central Asia, the level of malnutrition decreased from 11.0% in 2004-2006 to 5.6% in 2016-2018, the countries of the Caucasus from 6.4% to 3.3%. However, in recent years there has been an increase in the incidence of overweight and obesity.

An employee of the WHO Regional Office for Europe in Moscow, Kremlin Wickramasinghe, spoke about the activities of the WHO office in the European, Central Asian regions and the Caucasus to reduce the burden of noncommunicable diseases (NCDs), such as obesity, cardiovascular disease, diabetes mellitus, etc. Among the ongoing initiatives are epidemiological studies of obesity, the development of nutrition guidelines, the promotion of an active lifestyle and healthy eating, the popularization of breastfeeding, the study of the composition of food products and consumption of salt, monitoring of digital marketing of food products, etc.

A poster session was also held on the first day of the conference. Presentations by scientists and researchers of the Center for Ecological and Noospheric Studies National Academy of Sciences ( Republic of Armenia), Institute of Hydroponics Problems after G.S. Davtyan, Kuban State University, St. Petersburg University and Dokuchaev Central Museum of Soil Science were devoted to the influence of climatic changes and soil conditions on the quality of products and food security. Scientists from Yerevan State University and Vanadzor State University in their reports reflected the results of microbiological analysis of food products, and researchers from the Kyrgyz-Russian Slavic University presented a study on bread waste in public catering establishments. ECFS staff presented reports on determining the role of genetic factors in the formation of obesity, as well as assessing the competitiveness of Russian agri-food exports in the Chinese market and identifying ways to increase it.

On the second day of the conference, seven parallel sessions were held (detailed conference program on the website http://ecfs2019.org/). The Session on the Development of Organic Agriculture (DAO) the results of studies on five EAEU countries, carried out as part of a joint project by ECFS and the World Bank, were presented. Experts estimated the organic products market in the EAEU at 210 - 230 million EUR, which is only 0.25% of the global market. Factors that impede the development of land conservation in the region include the weakness of the domestic market (70-90% of organic products are exported), lack of statistics on production, sales and exports, lack of certification systems for organic land, and others.

The authors of the fourth round of case studies presented the results of studies on the introduction of an integrated approach to soil management in Russia and Moldova, the development of the value chain of organic agriculture in Russia and Armenia, soil-conservation and resource-saving agriculture in Russia, and the adaptation of land users to environmental and climate changes that limit farmland productivity in Uzbekistan.

At the Session devoted to the development of agriculture, Alka Parih, professor at the Institute of Information and Communication Technologies, touched upon pressing issues of improving the conditions for agricultural activities and ways to increase agricultural productivity, including ensuring the availability of water resources in India.

ECFS researcher Olga Cherkasova presented the results of joint study on the development of Russian agri-food exports to the Chinese market. According to experts, in the medium term, in connection with revenue growth, Chi-tai will increase imports of agricultural products. At the same time, Russia's current export profile in trade with China will continue, and the possibility of its expansion will depend on the competitiveness of the industry and agricultural policy.

ECFS staff Evgeny Tsvetnov and Alexey Belugin presented the results of testing the developed Food Security Index (FSI) in selected countries of the Eurasian region. Studies have shown that over the period 2013-2017, food security has improved in Armenia, the Kyrgyz Republic, Tajikistan and Uzbekistan. Russia demonstrates the best state of food security in 2017, the least favourable situation is observed in Tajikistan.

In the nutrition section, expert Maurizio Rosales, FAO Program Coordinator, highlighted the crucial and relevant issue of introducing the school feeding system in Armenia, Tajikistan and the Kyrgyz Republic. Thanks to the efforts of the FAO, WFP, and also with funding from the Russian Federation, there is currently a school feeding program in Armenia, the Kyrgyz Republic and Tajikistan. Also, in order to increase the nutritional value of diets, projects have been launched in Armenia and Tajikistan to create greenhouses in school territories.

One of the important topics of the conference was the role of rational use of natural resources in the context of climatic change. The Executive Director of the Regional Environmental Center for the Caucasus Nune Harutyunyan presented the results of a project to implement measures for adaptation and conservation of agrobiodiversity in the arid ecosystems of the South Caucasus. According to the study, as a result of climate change, cereal productivity in Armenia will be reduced by an average of 9-13%, vegetable crops by 7-14%, potatoes by 8-10%, horticultural crops - by 5-8%.

Enrico Bonauti ICARDA Monitoring, Evaluation and Training Specialist, noted the importance of using information technology in agriculture and presented the capabilities of the Central Asia Climate Change Information Portal, designed for a wide range of people.

The Ag Observatory Workshop on Digital and Disruptive Agricultural Meteorology for Agricultural Decision Support took place in the ANAU Agribusiness Teaching Center on November 1st. World Bank expert Caroline S. S. Franca presented the project and led the workshop. Participants successfully progressed in the hands-on modules tailored to the session, including use of the web-based platform, QGIS and R scripts for data access via API, data mining, management, visualization, analysis and interpretation vis-à-vis local context. The seminar was attended by 10 specialists from Armenia and Russia.

On the third day of the conference, field trips were conducted. The participants got acquainted with the high-tech mushroom production, visited the family-owned wine and cognac enterprise in the Ararat Valley, the Noi Brandy Factory, as well as a training center based on the Green Lane organic farm and the CARD Village and Agribusiness Development Center.

ECFS expresses its deep gratitude to the hosts of the conference - ANAU for the high level of organization of the event, the rich cultural program and unlimited hospitality. The next Annual Eurasian Food Security Conference is scheduled to be held in Uzbekistan in the fall of 2020.